During a pandemic, it’s natural that people would worry about their health, their families, or the possibility of infecting others. But sometimes, those worries can exacerbate existing mental health conditions. With obsessive-compulsive disorder, fears continue to loop over and over again, said Stephen Smith, founder of OCD therapy platform NOCD.

Smith, who was diagnosed with OCD in college, started the Chicago-based company in 2014 to make therapy easier to access. Since the Covid-19 pandemic started, NOCD has seen the number of sessions conducted through its platform double. An estimated 2.3% of adults have had OCD during their lifetime, according to the National Institute of Mental Health.

With OCD, Smith explained, people have certain fears, called obsessions. To make those thoughts go away, they’ll do different actions, called compulsions. But the anxiety and stress keep coming back.

For instance, the fear of getting sick may lead someone to wash their hands to the point where they are chapped and cracked. Or it could lead someone to go into the hospital for a Covid-19 test, even if they’re asymptomatic. It’s not just hand-washing; other stresses are magnified, too.

The biggest part of it, Smith said, is dealing with uncertainty. 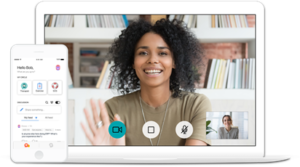 NOCD has seen the number of therapy sessions on its platform double since the pandemic started.

NOCD offers people live virtual therapy sessions with a licensed mental health provider, which are paid for per session. Outside of that, the platform’s users have free access to self-help tools and peer communities.

Smith said he had a severe onset of OCD during his senior year of college, but it took a long time to figure it out. He was misdiagnosed five times, had to leave his school and college football team, and started experiencing severe depression. After reading about others’ experiences online, he realized he might have OCD.

There was only one therapist in his area that provided OCD treatment. She had a 7-month waitlist, and the cost was $300 per session.

“I ended up finding a way to see her.  A family friend helped cover the cost of care,” he said. “I got back on my feet. I went back to school and finished my football career. This condition is so prevalent and so misunderstood, but it’s also so treatable.”

It’s hard to find therapists that specialize in exposure and response prevention, an effective treatment for OCD. And it gets even harder when limited to a particular insurance network.

Smith said the goal of NOCD was to make it easier to find therapists. He said the company is also working on partnerships with payers for coverage. The company has conducted thousands of therapy sessions to date.

With the ongoing pandemic, Smith said it brings the conversation about handling uncertainty to the general public.

“It’s a time of uncertainty,” he said. “This time also reflects what people with OCD go through every day. They go through uncertainty every day, and they’re trying to mitigate uncertainty in their life.”

The good news is, some of the skills used to manage OCD can be useful for the general public during a pandemic, according to an article by the International OCD Foundation. While it’s normal to want some level of certainty or comfort, it’s ok to realize that not everything is under control.

“In time, the anxiety and thoughts dissipate,” the article stated. “We act in accordance with our values despite our concerning thoughts and uncomfortable feelings and reclaim joy in our lives as a result.”

Why we need a wholistic approach to behavioral health

Life sciences in a changing world: Startup outlook through 2020

Former Apple CEO on the biggest trendlines in health technology

What Happens When the Queen Dies?

How To Do The L-Sit

What Is the Drift – Wellness + Sleep App?