As the case for virtual care and telemedicine ramps up, here’s another data point that might serve to convince those on the fence.

An article published last week in the New England Journal of Medicine shows that a virtual cardiac rehabilitation program was able to reduce heart failure-related readmission rates to less than 2 percent. Compare that to traditional cardiac rehab programs where the readmission rate is in the range of 10 to 12 percent. Traditional cardiac rehab comprises in-home care where patients are manually required to track their exercise regimens with pen and paper as well as on-site rehab where patients visit a location to complete their rehab.

The virtual rehab program brought together Kaiser Permanente, the largest nonprofit integrated healthcare system in the country and Samsumg Electronics, the Korean tech company which like many of its high-tech brethren is striving to change healthcare through digitization. 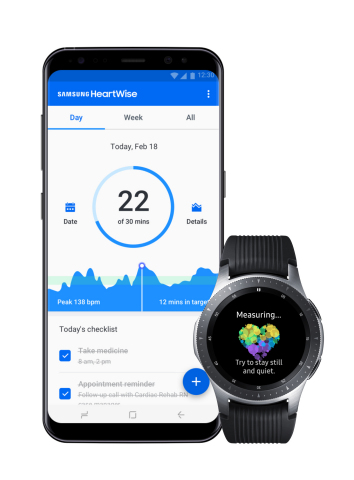 The remote cardiac program involved Samsung’s HeartWise application for patients using both Android and iOS devices and it was developed collaboratively with Kaiser. The app worked in conjunction with the Samsung Gear S3 and the Galaxy Watch wearables that were specifically configured for such an application. As of June, the program enrolled 2,362 patients and graduated 1,880 patients, per the NEJM article.

So, how did the program operate and why did it work?

Patients who can benefit from a cardiac rehab program are referred through Kaiser’s EHR, HealthConnect. They received the wearable at the very first appointment and also download the app. Patients then have the freedom to select from a set of different exercise regimens. The app also allows patients to add their own assessments of how much they are exerting as well as input any symptoms they are experiencing. Their heart rate info, as well as the inputted information, becomes available to clinicians at Kaiser through a dashboard.

In turn, the clinician can use to set exercise goals for users and can monitor whether the patients are adhering to the regimen as well as track progress. Patients receive written and electronic educational materials and can be referred to other patient education classes if they have other co-morbidities. The program calls for weekly virtual visits where patients connect with their assigned case manager who can consult with the doctor to make adjustments to their treatment. These check-ins also help to screen for depression and provide a way to offer support, per the article.

Although the Kaiser-Samsung collaboration is to observe the efficacy of a technologically-driven remote rehab program, there appears to be a deep emphasis on patient-to-care team connection. After a referral, the first appointment is actually made in person to facilitate a bond between patients and their care team. Weekly phone calls occur in the subsequent seven weeks between a case manager – the same case manager with the patient – to enhance the bond initially made and to deepen the trust.

So in the 36-session, eight-week program, there is plenty of person-to-person interaction. And there is support available after the program is over. Wellness coaching was offered for another eight-to-12 weeks following graduation from the program.

The NEJM article specifically lists six steps that were undertaken to make this program a reality. Here are the notable ones:

The success of the pilot has led Kaiser to scale this program to all 13 centers in its Southern California region. This case study showed thatwhen comparing with site-based cardiac rehab programs that are hampered by the inability of patients to regularly attend among other factors, cardiac rehab program completion rates jumped by a whopping 74 percent. Further, total referrals to any site Cardiac Rehabilitation have increased 44.5 percent since the launch of this remote, home-based program. In other the virtual program is generating interest in site-based rehab.

I Ate Dessert Every Night and Still Lost Weight

Why It Took Years For Me to Be Diagnosed With Endometriosis

Gene-editing firms sign on to statement of ethical principles, with emphasis on germline editing