The amount of deals and dollars invested in healthcare is hitting near record highs for the first half of 2019 with $26.9 billion poured into healthcare companies over 2,258 deals around the world, according to CB Insights’ Global Healthcare Report.

That represents a slight uptick from the first half of 2018 where $26.5 billion was invested over 2,223 deals.

Digital health specifically has been a major driver of that growth with $3.5 billion invested in Q2 of 2019, a 23 percent jump from the first quarter. When it comes to centers of that deal flow domestically, California ranked in first place for Q2 followed by Massachusetts and New York, respectively.

Outside of the U.S. the leading countries in digital health according to deal flow have been China, U.K., France, South Korea and India.

A few areas recently targeted by investors have been companies utilizing AI in healthcare, as well as mental health and wellness startups. Healthcare AI companies raised $864 million from VC firms in the second quarter of 2019 and mental health startups raised $321 million across 26 deals.

One potential concern in the report has been the drop in investment into Asian companies in the second quarter of 2019, potentially driven by the intensifying trade conflict between the U.S. and China.

When it comes to the most active healthcare investors for Q2, CB Insights listed First Round Capital and Jumpstart Foundry in the top spot. The investors joined together in a number of financing deals like the $16 million Series C round of Indian diagnostic startup SigTuple and the $75 million invested in gym and clinic operator CureFit 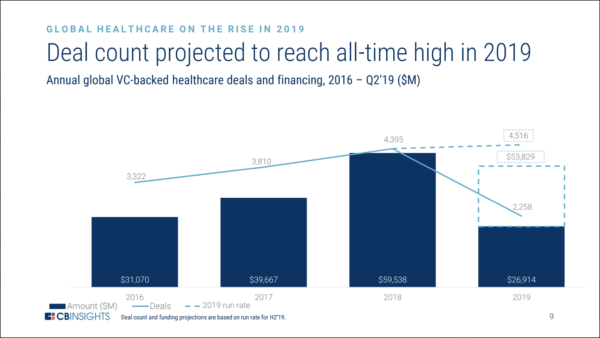 By CB Insights’ count, the growth in investment and valuation means there are currently 38 VC-backed digital health unicorns worth a combined $90.7 billion.

Nine-figure megaround into companies like Chicago-based Tempus and French healthcare practice management startup Doctolib have resulted in continued increases in valuation figures. The report counts 8 digital health mega-rounds around the world since the beginning of this year including investments in Collective Health, Encoded Therapeutics and Weimai.

Projecting outward, CB Insights sees total investment dollars slowing in the second half of 2019, but deal count continuing to rise to more than 4,500.

Jeera Water: Benefits and Side Effects

How To Master Step-Ups | Coach